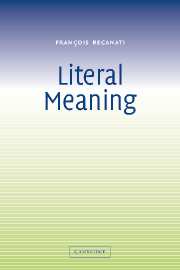 I'm getting a little out of order here, but I had to read Literal Meaning over the break, so it made sense to offer something on Jason's NDPR review just now, and then come back to 'On Quantifier Domain Restriction'.

One of the things I've noticed reading the literature on this stuff is that no one agrees about where the really interesting issues lie. Recanati, for example, spends a great deal of time putting distance between his view and Relevance Theory on issues such as whether primary pragmatic processes (those that go into determining truth-conditional content, rather than those by which what is communicated is determined) are inferential (a topic which some of you will know is becoming very close to my heart). In contrast, Jason writes:

Cappelen and Lepore also want to downplay the importance of debates between contextualists, but from their perspective, Jason's view is to be lumped together with Recanati and the Relevance theorists:

'The label 'the Deep/Fundamental Issues' should be awarded to a range of issues independent of any debates internal to MC or RC.'
(Insensitive Semantics: 13)

So not only do we have a range of very different takes on this set of issues, which position one takes seems to shape one's perception of where the real action is. I don't think this is at all unusual in philosophy, but here we have a particularly stark illustration of the phenomenon.

Jason's review is of particular note between it takes on directly the difficult tasks of offering a taxonomy of positions in the debate and trying to get clear on what's at stake between them (as befits a review of Recanati's book). It also raises some methodological issues about how the debate should be conducted, and it's these I want to discuss here. I'll come to them a little indirectly, however, via a discussion of the following (independently interesting) issue.

Let's follow Recanati in calling the thesis Jason wants to defend indexicalism, and consider the following question: does indexicalism start at a serious disadvantage in the nature over the nature and extent of context sensitivity in natural language? In Literal Meaning, Recanati argues that indexicalism does indeed occupy lower ground, on account of the kind of claim the indexicalist must defend:

'Without going into those [technical and empirical] details, it is fair to say that the indexicalist starts with a significant disadvantage; for he makes a universal claim while his opponent only makes an existential claim. For his opponent to win, it is sufficient to produce one convincing example of a strong pragmatic effect. But the indexicalist is condemned to deal with all putative cases, and to show that they are not what they seem to be.' (2004: 89-90)

'Recanati misstates the dialectical situation. The contextualist's method for arguing against indexicalism is to produce a reading R of a sentence S, and argue that R is not the result of the semantic interpretation of S, relative to the context of utterance. In each such case there are three responses available to the indexicalist.......The advocate of strong pragmatic effects on intuitive truth-conditions must produce a case, and show that none of these options is available for that case. For each putative case in which it can be persuasively argued that [it is not an option to 'establish that the alleged reading is not part of the intuitive truth-conditions of an utterance of that sentence, but is instead due to the pragmatics'], the contextualist [...] must establish that there is no way of accounting for the problematic reading within the semantics. From this perspective, it is the contextualist who makes a universal claim.' (239)

It's not immediately clear what Jason is claiming here. The first and last sentences of this passage might suggest that he thinks Recanati has just got things back to front; it is the contextualist who makes the universal claim and the indexicalist who makes the existential claim. But that doesn't seem quite right. For indexicalist clearly does make a universal claim; recall Jason's statement of his core thesis from the opening lines of 'Context and Logical Form':

'My purpose in this chapter is to defend the thesis that all truth-conditional effects of extra-linguistic context can be traced to logical form.' (30)

So I think a charitable reading of Jason's response to Recanati has to credit him with recognition that at some level Recanati has correctly described the structure of the debate between them. I think that in claiming that Recanati 'misstates the dialectical situation', Jason is referring less to the claim about the structure of the debate, and more to the suggestion that the indexicalist starts with a disadvantage. The contextualist might only have to produce one persuasive case of a truth-conditional effect of extra-linguistic context which is not traceable to logical form, but Jason's real objection is that Recanati has misrepresented how easy it will be to come up with the golden ticket here.

Interestingly, Jason's response here seems to assume that indexicalism should be the default position, and that the burden is on the contextualist to provide examples that aim to move us away from indexicalism. This is a point he addresses explicitly in the review, responding to Recanati's charge that indexicalism is 'dogmatic and stipulative' (it's also a theme of the introduction to Language in Context, recall). He writes:

'Why believe the indexicalist hypothesis? Recanati finds excluding "top-down" or "strong" pragmatic effects on intuitive truth-conditions "as dogmatic and stipulative as the literalist restriction of context-sensitivity to a short list of familiar indexical expressions' (160). But the indexicalist claim is an empirical hypothesis, not a stipulation about content. Furthermore, it is an empirical hypothesis that has a reasonable basis.' (238)

'The indexicalist's position is a plausible starting hypothesis for how language is able to be sufficiently elastic as to be usable, and sufficiently rule-governed as to be useful. It is a reasonable empirical hypothesis, in advance of detailed inquiry.' (239)

But I'm not sure this really gets at Recanati's worry. Though he perhaps didn't put things very well by accusing indexicalism of being 'dogmatic and stipulative' (and hence inviting precisely the kind of response Jason offers), I think Recanati worry is methodological from the outset. The charge he wants to make isn't really that Jason's claim is empirically empty; as he admits in a passage cited above, the issues get technical and empirical very quickly. The point is rather that we shouldn't endorse such a general thesis in advance of examining the various constructions. We should instead adopt methodological contextualism:

'Any expression may, upon analysis, turn out to have a context-sensitive semantics, that is, be such that its truth-conditional contribution varies across contexts.'

Put in hippy form, Recanati's objection to Jason is that he's not going into the study of particular constructions with an open mind; he's already laid down in advance a strong generalization about the limited role extra-linguistic context can play, and that, Recanti is suggesting, is stifling.

If this is how we should take Recanati's objection (and I think it is, though I have to admit there are passages in these pages where he clearly seems to be making the kind of charge of empirical emptiness that Jason takes him to be), then Jason's comments in his review don't really seem to get to the heart of the issues; Recanati would presumably just regard it as more of what he was objecting to. That's not to say Jason has nothing to say in response; on the contrary he's going to push the line that contextualist views that allow extra-linguistic context to determine truth-conditional content in ways that go beyond providing values for items in logical form render mysterious how it is that we can interpret the utterances of others as smoothly as we are able to. And so indexicalism provides a better starting point. As he writes in the introduction to the book:

'I have great difficulty seeing alternative proposals as sufficiently constrained. Proposals that appear smoothly to account for the bewildering variety of ways in which context appears to affect the relation between utterances and their intuitive truth-conditions only do so because they appeal (whether overtly or covertly) to interpretative processes that are deeply mysterious or wildly unconstrained. I prefer to explore a view that is neither mysterious nor unconstrained, and see how far one can use it to explain our linguistic behavior. If, at the end of the day, my proposal is too constrained, perhaps the investigation into its adequacy will reveal systematic ways of modifying it or liberalizing it. This seems more promising that beginning with a mysterious and unconstrained process, and trying to add on stipulative constraints. If we do not have a clear grip on the process with which we began, why thing that adding on restrictions will yield any greater elucidation?' (21)

We'll get to assess the charge of lack of constraint when we get to 'Making it Articulated'. In any case, these methodological issues about which perspective we should adopt going into the empirical study of different constructions seem about as challenging, rich and important as the issues about who's right, and it's a virtue of Jason review that it brings the former issues into such sharp focus.

(RC) There is a sentence such that for all indexicalist treatments, that sentence resists the treatment.

Whereas (I) is making an AE claim.

If this is Stanley's point, then I think that Recanati's still got a point about the prima facie plausibility of (RC) versus (I). It may be that there are sentneces such that it's just clear that no indexicalist analysis has a remotely plausible shot at treating.

Of course, this kind of claim has been made before, that certain kinds of semantic analyses couldn't treat certain kinds of sentence, eg about indexicals. Jason seems fond of pointing out that with more sophisticated semantic tools, semanticists could bring the problematic sentences under the scope their theory. But oftentimes, this meant fundamentally altering the kind of semantic theory on offer. So, I'm not sure that this historical point his view much more plausiblity.

I was suggesting in the post that a more charitable reading of Jason's remarks would be to take him, not as making a point about quantificational structure, but rather about the dialectical significance of the particular structure Recanati points to. I was suggesting that he probably doesn't want to deny that, at some level, the debate has the structure Recanati attributes to it. It's just that this doesn't show that the indexicalist starts off at a disadvantage, because there's the embedded structure you usefully lay out as (RC) and (I).

What kind of sentences did you have in mind that might be taken as obviously intractable for the indexicalist? Non-sentential assertion looks on the surface to be a tricky phenomenon for the indexicalist to make sense of, but of course whether there is any genuine cases has turned into a hotly contended issue. I'd be interested to know what kind of cases you were thinking of.