The scope of Dummett's arguments against realism 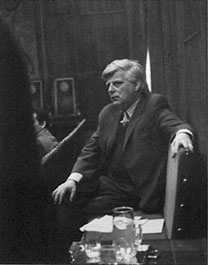 As soon as you start to look at Dummett's arguments against realism (discussed in the previous post), the issue of their scope becomes really important. There seem to me to be two main issues here (though there are no doubt others I'm just not sensitive to yet). The first is the modus tollens argument sketched by Dummett in 'Wang's Paradox' and discussed in detail in Wright's 'Strict Finitism'. (I'm grateful to Ofra Magidor, for I assume it was she, for forcing me to rethink the significance of this argument after an exchange on TAR). The suggestion is that intuitionism in the philosophy of mathematics isn't a stable resting place; the best arguments in favour of intuitionism over realism about mathematics also favour some kind of strict finitist position over intuitionism. And if strict finitism should prove to be incoherent (as Dummett suggested), that casts suspicion on the intuitionist's original arguments.

It's the second issue about scope I want to discuss here. Dummett has often been taken as offering arguments in favour of global anti-realism, i.e. realism about every domain of discourse. Now, Wright's Truth and Objectivity offered a view of realism/anti-realism debates according to which these battles were to be fought locally over some disputed class of statements: mathematical statements or statements about the past, say. It's perhaps insufficiently appreciated that Dummett saw these debates being settled locally too. Here's a quote from a 1969 paper:

'Perhaps the most interesting question about realism is precisely whether global anti-realism is coherent: for, if it is not coherent, then there must at least be some restrictions on the applicability of the anti-realist argument, and, by finding out what these are, we may hope to take a large step towards seeing how to resolve the various particular disputes. There are a number of reasons for doubting whether global anti-realism is coherent, for instance: behaviourism is one species of anti-realism, namely a rejection of realism concerning mental states and processes; phenomenalism is another species, namely the rejection of realism concerning physical objects and processes; it immediately occurs to us to wonder whether it is possible consistently to maintain an anti-realist position simultaneously in both regards.'
(Dummett T&OE: 367-8)

'My original intention had been to prompt what is called a ‘research programme’ in the form of a comparative study of disputes over realism. It had struck me that a variety of different traditional disputes within philosophy took the form of an opposition between a realist view of some particular subject-matter and a rejection of realism concerning that subject-matter; often one side in the dispute was conventionally labeled ‘realist’, though in other cases not. It appeared to me that no agreed method of settling these disputes was available, and that philosophers picked sides in them on the basis of predilection, not because they had discovered a means of resolving them. It further appeared to me that there was a striking parallelism in the arguments used on both sides in each of these disputes, so that, if one prescinded from the particular subject-matter, one could exhibit the abstract structure of the dispute. No two of the disputes seemed to me to be completely isomorphic, so as to have an identical abstract structure in common; but the structures were so similar that it seemed to me fruitful to propose that we should make a comparative study of them, from which, I hoped, principles would emerge for deciding in which cases the realist was in the right and in which cases his opponent.

I was understood, however, not as proposing a research programme, but as putting forward a specific philosophical thesis of great generality: not as suggesting a comparative study of a range of structurally similar problems case by case, but as advancing a single unitary thesis.'
(Dummett, The Seas of Language, 1993: 465-6)

The obvious problem is that the arguments Dummett put forward on the anti-realist's behalf turned on perfectly general questions in the theory of meaning rather than any distinctive features of a certain class of local realism/anti-realism debates; the arguments look like they'll settle every debate in the anti-realist's favour, if they go through at all. As Crispin puts the point: 'the best of the anti-realist arguments have a generality which makes it hard to see how they could succeed anywhere unless sucessful everywhere' (Realism, Meaning & Truth: 2-3). Dummett's suggestion in the 1969 passage quoted above that part of the project of resolving these debates will be to discover the limits of the anti-realist's arguments is fascinating, but the nature of the arguments makes it very hard to see how there could be such limits. This is the second issue concerning their scope.

Unfortunately, Dummett wasn't very consistent on this point as far as I can tell. After reading the 1969 passage, one could be forgiven for being somewhat surprised to find Dummett writing in a famous paper written just four years later:

'It follows that, is so far as an intuitionist position in the philosophy of mathematics (or, at least, the acceptance of an intuitionistic logic for mathematics) is supported by an argument of this first type [I think he's here referring to the manifestation argument, but I'm not quite sure], similar, though not necessarily identical, revisions must be made in the logic accepted for statements of other kinds. What is involved is a thesis in the theory of meaning of the highest possible generality. Such a thesis is vunerable in many places: if it should prove that it cannot be coherently applied to any one region of discourse, to any one class of statements, then the thesis cannot be generally true, and the general argument in favour of it must be fallacious. Construed in this way, therefore, a position in the philosophy of mathematics will be capable of being undermined by considerations which have nothing directly to do with mathematics at all.' ('The Philosophical Basis of Intuitionistic Logic' in T&OE: 227)

This is a startling passage. First of all, it's hard to square Dummett's observation here that '[w]hat is involved here is a thesis [...] of the highest possible generality' with his later surprise that people took him to be putting forward 'a specific philosophical thesis of great generality' (see the 1993 quote above).

More surprising, of course, are the related suggestions that anti-realism must be global, and that if it we discover it cannot be defended for any class of statements, that teaches us not something important about the scope of the anti-realist arguments, but that those arguments 'must be fallacious'.

The 1969 paper ('The Reality of the Past') and the 1973 paper are two of Dummett's most famous contributions to these debate. It's bizarre (almost Russell-esque) to find him expousing such different views on this clearly very important issue within such a short period of time. It's hard not to suspect that the 1973, more pessimistic attitude must be correct. That said though, the 1969 suggestion that there is something interesting and important that can be learned about the scope of Dummett's arguments remains seductive, albeit ellusive. But that's par for the course.

This is really just an ignorant plead for clarification. You wrote:

Now, I always thought that it was exactly this feature which was taken to be a merit of of Dummett's treatment; i.e. that the insight gained from Dummett's work was that the local debates have a general, common structure, namely the epistemic/evidential constraint on the truth-conditions for the statements in question.

What exactly is the problem with this?

So it's certainly true that Dummett thought a big merit of this way of thinking about the debates made explicit a common structure in them. He says precisely this in the 1993 passage quoted:

'It appeared to me that no agreed method of settling these disputes was available, and that philosophers picked sides in them on the basis of predilection, not because they had discovered a means of resolving them. It further appeared to me that there was a striking parallelism in the arguments used on both sides in each of these disputes, so that, if one prescinded from the particular subject-matter, one could exhibit the abstract structure of the dispute. No two of the disputes seemed to me to be completely isomorphic, so as to have an identical abstract structure in common; but the structures were so similar that it seemed to me fruitful to propose that we should make a comparative study of them, from which, I hoped, principles would emerge for deciding in which cases the realist was in the right and in which cases his opponent.'

But what's equally clear from this passage is that again at this point Dummett doesn't think all these local debates must be settled in the anti-realist's favour. He's emphasised structural similarities between the debates, and hopefully pointed towards a common methodology for resolving them. But there's none of the 1973 suggestion that we must be headed for a global anti-realism here.

Once we look at the kinds of arguments Dummett thinks might be able to settle the debates, however, it's hard to see how he can think there could be merely local victories for the anti-realist.

Ok, so why would it be a bad thing if we're in for global anti-realism or nothing? First of all, there's the question mark Dummett points out concerning the consistency of global anti-realism. The example he gives in the 1969 passage in the post (behavourism and phenomenalism) is cute, but I don't think very worrying. But I take it real issues aren't far away - the Church-Fitch result springs immediately to mind.

It's also just pretty implausible to my mind that just because we've identified a common structure to the debate between, say, the realist about mathematics and the intuitionist on the one hand, and Williamson and Wright over vagueness on the other, that we should expect them to be resolved alike. It's a little worrying to be told, like we in effect were in the 73 passage, that Crispin's position on vagueness stands or falls with intuitionism about mathematics.

This has always been one of the most difficult issues for me in understanding Dummett, and it was very nice to see these passages laid out side by side. For a while now, I've felt that the 1993 statement of methodology was Dummett's clearest and most plausible claim for the scope of his anti-realist arguments. However, there are two aspects of this reading that require comment. First, the 1993 statement is clearly revisionary, as you've done well to point out. Second, and more seriously, given the generality of the anti-realist arguments, how can they be construed merely as strategies for settling domain-relative disputes?

I think there is an answer to this last question, though I am not enough of an expert on Dummett to offer what it might be. I propose that what is needed is a relaxation on the acquisition and manifestation criteria for knowledge of meaning. Perhaps the argument needs to be made that these criteria characterize one way of coming to understand a language, and insofar as these criteria are operative within a domain, then just so far is that domain anti-realist. This is all pretty sketchy and under-developed, potentially completely wrong, but it looks like the kind of thing that Dummett would need to say to substatiate the 1993 statement.