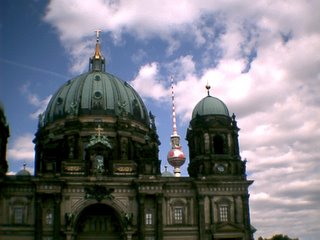 In the few weeks I've been in Berlin, the city has been host to the final of the World Cup and the Love Parade. But all that is about to pale into insignificance, for today this historic and wonderful city plays host to Philosophers' Carnival #33, this month's showcase of philosophical bloggery from around the globe.

I say philosophical, but fittingly given the title of this blog, we're going to kick off with some linguistics. I've been taking an intensive German course while I've been here, and so I enjoyed Mark Liberman's posts 'We feel sad because we say ü' and 'Sad knights who say nü' over at one of my favourite sites Language Log. Liberman pokes fun at an article that reports that Germans are such a miserable bunch because the facial movements they are forced to make to say letters with umlauts forces them to frown a lot. The highlight is this quote from Robert Hellig:

'What makes me even more suspicious about this Umlaut story is the fact that English has similar sounding vowels as the German Umlaut, even if they are not written with two dots. To my amateur ears ä is the same sound as in Big Mac, ö as in turn or turbulence and ü as in bureaucratic. Thus my theory would rather be that the process of writing lots of dots makes you grumpy, as the facial expressions should be the same for speakers of the two languages.'

It's an interesting theory, but I think sadly it's demonstrably flawed. You see, German speakers love writing lots of dots, as anyone who has ever tried to read any of the pioneering work in mathematical logic from the early part of the last century will easily appreciate. Over at LogBlog, Richard Zach sheds light on how to read 'Dots as Brackets in Formulas'. Now you can read those parts of the Tractatus that say crazy things about the identity sign!

Fortunately, we've streamlined notation a bit since then. But what would an argument for a deeper revision to our logical practices look like? In his post 'Dummett on the Revision of Logic' on the UConn grad students' What is it Like to Be a Blog?, Colin Caret writes on a subject very close to my own heart right now. Colin characterizes Dummett’s argument from the ‘Manifestation Criterion’ to the rejection of classical logic as a reductio, and argues that to the extent the argument is valid, it relies upon inference rules that the intuitionist doesn’t sanction. (Note: The deadline is fast approaching for the UConn/Yale graduate conference. See the call for papers here.)

Dummett famously set his philosophical work to one side in the 60's to try to counter the growing threat of racism in Britain. In an interesting post on Sago Boulevard, David Fryman tackles some difficult questions about how one might justify patriotism, given that one does not wish to regard one's copatriots as intrisically morally privileged. That is, how can we account for the force of 'ethical obligations that stem from loyalty to one's country' once we've recognised the somewhat arbitrary character of any such allegiance? In 'Patriotism as Gratitude' Fryman draws an illuminating analogy to one's obligations to one’s own family, arguing that the lesson in both cases is that the moral obligations incurred stem from the requirement to show gratitude for the benefits one receives.

'Where ever they go, "Pop Idol" spin-offs inevitably inspire comparisons with the democratic process--a phenomenon frequently referred to as "Idol Democracy."' In 'Twilight of the Idols' over at The Naked Gaze, Carlos Rojas explores 'Idol Democracy' a little deeper, arguing that the analogy highlights some of the 'more troubling' aspects of modern democracy, and uses such shows as an entry-point for a discussion of Wendy Brown's theory of ressentiment.

Eric Schwitzgebel considers different answers to the question of where in the body it seems to us that thinking takes place, and wonders to what extent the associated phenomenology varies with cultural context, or whether the phenomenology is always the same, but our opinions about our phenomenology shift with cultural context (together with other factors) in a manner that explains the dispositions of the products of different cultures to offer different answers. Check out his post 'Do we experience thoughts as in our heads' at The Splintered Mind.

To what extent does contemporary philosophy of mind need an injection of metaphysics, philosophy of science, or both, in order to make progress? Gualtiero Piccinini contrasts recent answers to this question in 'Mind, Metaphysics, and the Philosophy of Science' over at Brains.

How should science itself try to make progress? In 'Conceptual essentialism' on his blog Philosophy of Real Mathematics, David Corfield discusses an interesting comment by mathematical physicist John Baez. Baez expresses frustration with the 'swarming' style of trying to make progress in theoretical physics, where 'nobody takes the time to distill the matter to its essence.' For Corfield, distilling matters down to their essences is exactly what mathematics at it highest level aims at, and here he looks for a catchy name for this position to impress its importance upon philosophers of mathematics.

'C.S. Lewis, Instinct, and the Moral Law' on hell's handmaiden picks apart an argument by C.S. Lewis that aimed to show that we must believe in God because nothing else could explain the high levels of intersubjective agreement on moral issues we (apparently) observe:

'In Book 1, Chapter 1, of Mere Christianity, Lewis presents an argument for the existence of God, which rests on the idea that people worldwide hold to very similar standards of morality. This, according to Lewis, points to the presence of a God. Nothing else, according to him, can explain the cross-cultural similiarities. I suggest that there is another explanation, and that Lewis merely "stated the improbable and called it a day".'

Sticking with philosophy of religion for a moment, Kenny Pearce offers neon green reflections on the problem of 'middle-knowledge'. For those of you interested in the interaction between Divine foreknowledge and free will (and more relevantly here, issues concerning how to ground truths about what a free agent would do in counterfactual circumstances in a way consistent with Divine knowledge), be sure to head over to 'Truth-Makers, Truth-Conditions, and Middle Knowledge' at KennyPearce.

What is that makes taking drugs to gain an advantage in competitive sports wrong? In 'The Outspokin' Cyclist ' on Nicomachus.net, Philip Barron reflects:

'the concepts of respect and fairness, archaic as they may sound to some, are still what sport is based on. Training is a performance enhancing activity done in earnest. Preparing for a race, there is no substitute (physically or morally) for practice. If sport is a measure of physical discipline, mental toughness, and moral determination, then cheating leaves us unworthy of playing the game (much less winning).'

Heading way down south to Philosophy, et cetera, Carnival mastermind Richard Chappell asks 'Is it always good to prevent harm?' Most of us will think the answer is clearly no; sometimes in failing to prevent a harm, one might prevent a bigger harm. But Richard wants to argue that even considering cases where there will not be that consequence, it can still be ok to fail to prevent a harm:

'Typically, in preventing a harm we thereby make someone's life go better than it otherwise would have. In such cases, preventing harm is beneficial, and that's why it is usually a good thing to do. But there is another way to prevent harms: you can prevent the subject who would have been harmed from ever actually existing. There's nothing particularly good about that.'

What has been particularly good in its short lifespan is Brit Brogaard's new blog Lemmings. It seems pretty arbitrary to pick any one post out; so far its been full of high-altitude and high-quality points in the intersection between philosophy of language, epistemology and metaphysics. Recommended.

Representing the new generation of St Andrews lemmings is Andreas over at Plurality of Words, who in 'Some random thoughts on infallibility' distinguishes various theses that might be labeled infallibilism, and investigates their plausibility, and their connections to omniscience, the Church-Fitch result, and apriority. And yes, he has lost his marbles :) Representing the old guard, here on the boundaries of langauge I contrast Jim Pryor's recent presentation of anti-Given arguments with the perhaps more familiar presentation of John McDowell in Mind and World, and wonder who got it right.

Last but not least, in 'Explanation' Marco worries about various different accounts of explanation, and their ability to deal with contextualised and constrastive explanations in particular. Marco's post marks a natural place to draw this Carnival to a close, because on the 14th of August, El Blog de Marcos will host Philosophers' Carnival #34. Don't miss it.

Comments:
thanks for the heads-up on the formatting issue--it resulted from adding a google search bar a little while ago, and since I never use IE I didn't realize there was a problem. At any rate, it has now been fixed.
carlos

Yup, that's much better. Thanks, I've taken the comment out of the new version.

Why, what an honor! Included in a Philosopher's Carnival!

The words Big Mac, turbulence, and bureaucratic all make me feel sad. And the song Turn, Turn, Turn certainly has a sad sound....