Over at Leiter Reports, Brian Leiter has publicized a 'Spot the Logical Fallacy' party to happen during the build up to the election. It's obviously time to air this old gem again then: 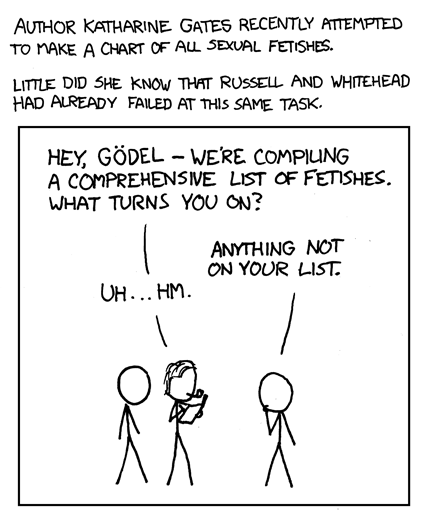 Proving that xkcd still has it.

The Man Who Told Everything

I've never understood this video, and I probably never will. It's somewhat disturbing in places, but the song is a classic from one of my favourite bands, and there's definitely something quite beautiful about the video, even its darker images. Here's Doves:

The UT Methodology workshop is finally over. We had sessions from Jeff King, Marc Moffett, Ernie Sosa, Josh Dever, Dan Bonevac, Roy Sorensen, Derek Ball, Dan Korman and John Bengson, plus round-table discussions on the place of data about natural language in philosophy, paradoxes, and thought-experiments. It's been an exhausting five days, but I've learned a lot from it, and the visiting speakers were great to have around.

Colleen has put up some really good photos of the event on her Flickr site, so check those out if you want a flavour of the event. There were a bunch more photos taken last night by other people, and hopefully some of those will be online at some point.

Well, it's finally that time. I'll be spending the next 5 days at the Methodology Workshop, which kicks off today with Roy Sorensen's 'What Makes Something Interesting?' and our own Josh Dever's 'Linguistic Idealism.

Alex G and Alex B have done a fantastic job putting this all together, and I'm anticipating it being a really fun event.

And I Was a Boy From School

I heard this being played really loudly in Fopp on Union Street last time I was back in Glasgow, and fell in love with it immediately. I was hugely surprised to learn it was by Hot Chip, since I'd really detested what I'd heard by them previously. Anyway, great song, interesting video. Good combination:

Knowing How to Hold Your Booze

In this post, I'd like to bring together a couple more thoughts about knowledge how that have been bouncing around my dome for the past eight months or so. As those of you who have read my previous posts on this topic will know, I tend to find myself torn in two directions. On the one hand, the linguistic evidence and my intuitive reactions to several cases discussed in the literature push me towards holding that - contra Neo-Ryleans, who hold that possession of the corresponding ability is necessary and sufficient for knowing how - some kind of propositional attitude is necessary. If this isn't intellectualism, it's damn close. On the other hand, I've been reluctant to accept, despite some of the linguistic evidence clearly pointing in this direction, that the propositional attitude one must have must be knowledge. Moreover, I've found the suggestion that knowledge how attributions don't entail the corresponding attribution of ability or success in action hard to swallow. In particular, I've expressed some sympathy for Noë and Hawley's suggestions that knowledge how attributions entail some kind of counterfactual success condition. My earlier posts on knowledge how were part of my ongoing attempts to balance these competing considerations.

Another source of reluctance towards accepting any version of intellectualism is that to me it intuitively mishandles particular cases. For example, I find it very hard to buy:

'Jane knows how to speak English' is true in a given context iff for some contextually relevant way w, Jane stands in the knowledge-that relation to the proposition that w is a way for her to speak English, and Jane entertains this proposition under a practical mode of presentation.

Now, I don't have any specific argument against this, and Stanley and Williamson would quite rightly be unimpressed by the mere fact that I find it implausible. But I do find it implausible, and that fact plays a role in my own thinking, even if it's rightly considered dialectically ineffectual.

A perhaps more interesting example is this one:

'Jane knows how to hold her booze' is true in a given context iff for some contextually relevant way w, Jane stands in the knowledge-that relation to the proposition that w is a way for her to hold her booze, and Jane entertains this proposition under a practical mode of presentation.

Again, I find this pretty hard to believe. Similarly with John and Marc's account:

Jane knows how to hold her booze just in case Jane knows for some way w that w is a way for her to hold her booze, and she minimally understands w, where to minimally understand a way w, is to have a correct and complete (possibly implicit) conception C of w and reasonably mastery of the concepts in C and their mode of combination, and where one has reasonable mastery of a concept just in case one is able, under normal conditions, to correctly apply that concept in core cases.

I guess the worry I had before was that these accounts of knowledge how over-intellectualize knowing how to hold one's booze. The charge of over-intellectualization is considered and rejected by Jenn, John and Marc in 'The Folk on Knowing How' on the grounds that folk attributions of knowledge how seem to be sensitive to whether the subject possesses a certain item of propositional knowledge rather than whether she possesses the corresponding ability. But I wonder if we'd keep getting those kinds of results if we focused on a different set of examples.

In particular, I suspect that people will judge that one knows how to hold one's booze only if one is able to hold one's booze. I can at the very least report my intuitions here; it doesn't matter what a subject knows or believes, if they invariably pass out in the fetal position after one Smirnoff Ice, they don't know how to hold their booze. Of course, sometimes one will be ill, and so on. But if one would pass out after one drink even when there are no mitigating factors of this sort, one does not know how to handle one's booze.

Let me offer a new reason for regarding this example as particularly interesting, before anticipating an objection one might have. The counterfactual I just invoked can seem suspect because of cases in which a subject can manifest her knowledge how without exercising the corresponding ability. As Snowdon writes (p9):

'To construct such examples we need to describe cases in which the subject can show, teach, or tell (or otherwise convey to) us how to do something, and hence must be credited with knowing how to do it, but is for some reason or other unable to do it.'

The paradigm here is Jeff King's ski instructor, who is in great demand to teach particular stunts, but who is unable to perform them himself. We don't, it will be claimed, need to regard him as meeting any reasonable counterfactual success condition in order to regard him as knowing how to perform the stunts.

Let me turn, as promised, to the consideration of an objection that might have occurred to a reader by now. One might think that holding one's booze shouldn't be considered as falling in the scope of a proposal about the nature of knowledge how, just as we're not interested in the digestion of food, to take an oft discussed example. But it's wrong to assimilate holding one's booze to digesting one's food. Knowing how to hold one's booze usually requires practice, and it is something one can systematically work towards (indeed, I have a good friend who did just that the summer before he started college). It's not just something one's body does under normal conditions, like breathing or digesting one's food. Of course that's vague, but there does seem to be a world of difference here. This manifests itself, I think, in the fact that that we're uncomfortable attributing knowledge how to breathe or how to digest food, while it's perfectly natural to speak of someone knowing how to hold their booze. This asymmetry doesn't seem to be due to Gricean effects: notice that 'Jane knows how to breathe - not that I mean to suggest that was in question' seems weird, suggesting that the asymmetry is not explained by our typically assuming people know how to breathe but not that they know how to hold their booze. We just don't naturally think or speak in those terms at all.

Moreover, there are other examples which don't seem at all like the case of digestion of food, but which display the same behavior. Consider, for instance:

'Jane knows how to handle herself.'

Now, one worry I do have is that these examples both seem a little idiomatic. So I end with a couple of questions I'm unable to answer. First of all, if they are idiomatic, does that mess up the points I've been trying to make with them here? Second, are there any examples which don't feel so idiomatic, but which can be used to make those points? To try to be clearer, the crucial features of such examples seem to be this: 1. It is very plausible that one possesses the relevant know how only if one meets a counterfactual success condition; 2. one cannot construct counterexamples to the necessity of the counterfactual success condition by focusing on instructor cases, since a possessive or reflexive pronoun gets in the way of successful instruction being a mark of possession of the relevant item of knowledge how. How about:

'Jane knows how to look after herself'?